I use Watch2Gether to watch Twitch and primarily YouTube, and something I really would like support for is playback speed. Both of these services have these options for their player, but the Youtube’s embedded code used for W2G hides the buttons to use the W2G controls so there is no way to access this without console scripting I imagine. I can sync with others while watching Twitch with a faster playback speed, but all members have to apply the change manually.

I would love to see official support where playback speed can be changed by any users with video control, where this change is applied to all viewers.

I understand that not all video services provide playback speed, so I would suggest hiding the button when the video host doesn’t support it.

Here are some API links I looked up, idk if you actually need them or not, but I figured I’d drop them here.

For Twitch, I couldn’t find anything, but I would think it’s possible but it is a fairly recent update to Twitch so maybe the API page isn’t updated.

With that said, I want to thank you for making this website. It really makes watching videos with friends possible no matter where you are.

Thanks a lot for your input. You are right, Youtube now supports changing the playback speed through their API. I will consider implementing this in the next version of the player. What would be your use case for this feature in a Watch2Gether room?

We watch a lot of playthroughs, speedruns, challenge runs, etc. So by increasing the speed we’d be able to get through stuff faster. Some of these videos are 4 hours each, with 5-6 parts or more, so it saves a lot of time while absorbing the same amount of content.

Thanks… this helps me to better understand the need for this feature!

Also, while we don’t really do this, many people will watch news, or biographies, or other educational material at a higher speed to absorb it faster. I could see this for student group sessions where they’re all learning together at their homes, pause and go back to a talking point to review / emphasize it to the group if someone had a question, etc.

Great idea. I don’t have anything to input I just thought I’d say how great I think it is that the creators are so responsive. So great to see

I’d just like to drop this lil tidbit in here. Today I tried to use Chrome’s DevTools to see if we could stay synced with increased playback speed. First, we both selected the video player (important), then went to the console and did $0.playbackRate = 2 (to make playback speed x2). We’ve been watching for 2 hours now and still are in sync, so @florian, if you had concerns with staying in sync when you change the playbackrate I would like to confirm that there are no issues (at least with 2 users atm).

Looking forward to official support on this, but pretty awesome that there is a way to do it in Chrome’s Dev Tools. 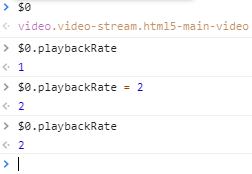 Thank you very much for this in-depth research

I’ll implement this when i work on the player the next time. Just have to finish of some other stuff first…

There is now a first version of the playback speed option online. Currently only for Youtube and there might be limitations on some devices. Please have a look and provide Feedback!

Thank you, works great for us.

Cool, thanks for that feedback!

The need that we need the playback rate for is for large chunks of videos being watched, and having to set the playback rate after each video kinda defeats the point when the above command can be set and forget until you refresh the page.

It may be that the official API doesn’t support it because you’re loading in a new video, but a simple temp cookie could be used to reapply the playback rate if it’s not the same as the one set by the user. To give you an idea, some of the playlists we’ve watched have been 20-50 videos ranging from 2 minutes to 10 min+, so having to set the playback rate that often is what I’m talking about.

Also, something that happens that the above console command doesn’t address, if one of the users refreshes the page, or joins in after the command, their playback rate is set to 1 while the rest of the viewers still are set at the modified rate. This causes a desync issue for the user who’s playback rate doesn’t match the rest of the group.

Thanks for your feedback! I understand the issue. It would actually not be a big problem to set the playback speed with every new item selected from a playlist. I’m just a bit worried that this could be confusing for new users joining a room. Another point is that not all platforms support the change of playback speed and playlists can contain mixed content from different sources. I would therefore like to monitor the usage of the new feature a little bit and then decide how to move on.