Hello. I want to kick some Members: 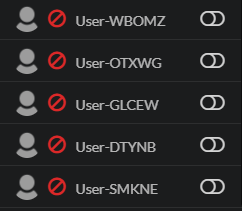 ive banned them already, but i really want to remove them from the list

The users which are banned need to stay in the list so that their status is saved and they can (eventually) be unbanned. Please note that the list in the sidebar is only visible to you as the owner of the room. Other users don’t get to see the list of banned people. Does that help?

But what if you just want to kick them, like in the case of you joining your own room before logging in so now you have a temporary user in your room? Banning will remove it from the room but it just fills up your members list for nothing, even if you ban them.

Yea, let us remove people instead of banning them please. I don’t want to have a big list of onetime users i shared my room with filling up my settings…

There is now an option available to remove users from a room without banning them. The users have to be offline and not banned, then a “X” symbol is displayed next to their entry in the users list (owner only).