Hey there,
I have some weird problems recently. When posting an URL into watch2gether’s search bar URLs containing videos in playlists won’t show any results. Therefore I can’t browse videos from my favourites, likes or other YouTube playlists. If I search the same video seperately and paste it’s direct URL it works.
When taking the exact same video from my liked videos it doesn’t work. Tried it in Firefox and Edge, logged in and out but the problem occured every time. I remember playing videos from my likes and favourites though, so it definetly worked at some point in the past. That’s pretty annoying as I usually take the videos I want to watch on watch2gether from YouTube playlists like my likes.
I don’t know if it’s a bug or I’m just doing something wrong.

I addition to that sometimes when running watch2gether Firefox notifies me that a website is slowing my browser down. The videos are also buffering and out of sync more often recently and I’m witnessing some kind of lags.

Is the old way of importing playlists gone? I remember a searchbar on the left where you could post links to playlists and it would import the whole thing straight from YouTube but I can’t find it anymore.

Wanted to add some screenshots but apparently that’s not possible for kind of new users.

I hope someone can help me out.
Best regards
Finn

thanks a lot for your feedback. The playlist import has been changed in a way that links to playlists can now be put into the general search bar instead of an extra import dialog. Videos can then be picked from the search results. I just tested it with this list and it worked fine for me:

Regarding the import of likes… I’m actually not sure if that ever worked since i haven’t tried it myself. Could you provide me with a demo link that you tried to import?

I’ve heard that there might be issues with Firefox but so far i was not able to reproduce this issue. Do you have the impression that the instability is caused by certain actions that happen on the page (such as selecting a new video, importing a playlist…) Which plugins do you have installed in Firefox?

PS: You should now be able to post screenshots. Otherwise send them by email to florian@watch2gether.com

I’m 100% sure that it worked previously as I mostly showed my friends videos I liked, favourited or added to a playlist before and accessed them from there. 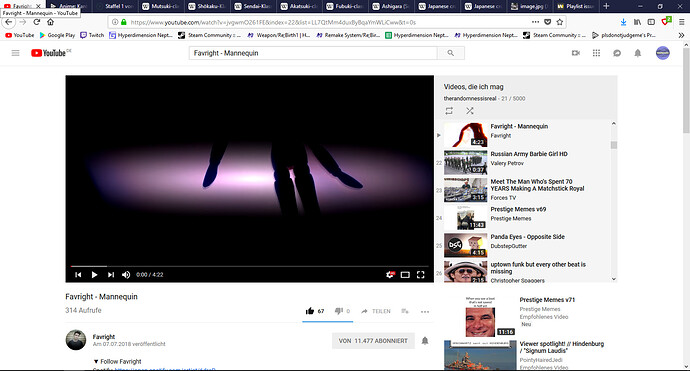 I think the lags could be related to searching videos (and the issue above) but can occur at random I think.
Plugins: Avira Browserschutz/ Avira Browser Protection, BetterTTV

Thanks for the update. I’ll look into this tomorrow!

Alright i checked out your playlist. The problem here is, that the list contains 5000 items. This is too much to be rendered into the search results. The browser slows down and eventually crashes because of the amount of HTML nodes and related resources required to display all these items. I will have to come up with some sort of pagination that breaks the list of items into smaller chunks. For now i have reduced the maximum displayed items to 500 but i’ll address this issue next week.

Thanks once more for your input!

thanks for checking that out. I just can’t imagine why it formerly worked and suddenly just stopped working. So now it has to render the whole playlist even though I picked just a single video out of it?

ok i think i understand now… When the URL that you paste into the searchbar contains a “list” parameter like in your case:

… Watch2Gether thinks that you would like to load the whole playlist and not just a single video. Because your list is so large it seems like nothing is happening.