The new layout causes a big problem for anyone using mobile. The idea of W2G is to be able to continuously talk to friends while watching the same thing, however the new layout makes that very difficult as you can only pay attention to what someone is saying or the video as opposed to being able to do both as you could before the update. 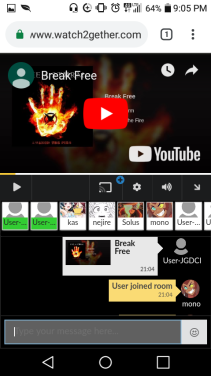 It’d be a lot more convenient if one could have the chat without having to scroll away from the video and potentially miss what you’re watching or risk looking like you’re ignoring what someone is saying. I think that should be fixed for mobile users.

Thanks a lot for your feedback. Can you be a bit more specific about the issue? On your screenshot it looks like you can see chat and video at the same time. (Same as before the design update) Or does the player no longer stick to the top of the screen for you?

No, the player doesn’t stick. You need to scroll back and forth between the player and the chat to see either fully. So in order for one to talk you’d have to sit at the bottom of the site and the player is no longer visible, and in order to see the full player you’d have to scroll back up until you can’t see/use the chat anymore. The chat IS visible but only partially. You can’t see the new messages from up there, only the previous ones. The issue is that the chat and player aren’t fully visible at the same time as they were previously. One or the other is always cut off.

Thanks a lot. That sounds like a bug and wasn’t done intentionally. Which browser in which version are you using on your phone? If unsure you can check it here: https://www.whatsmybrowser.org/

It’s no trouble! Thank you for being willing to help. Google Chrome is what’s being used.

Can you give me the version number as well?

Alright, i think i found the cause for this and just rolled out an update. Please have a look and let me know if it’s fixed for you as well.